This module incorporates some house rules to facilitate play and exploit VASSAL capabilities.

The game designer says at the end of rules section 3:

During the American Revolution, both sides had fairly good intelligence about the number and location of enemy troops due to the large number of spies and sympathizers for each side.

The game as published uses "actual" troop numbers - which can't be tracked with a chit on each game piece (like disorganization and rout). Leader displays are provided in the game that serve the purpose and provide a hidden intel aspect to the game.

But having to check back and forth between the map and the leader displays is cumbersome and prone to error in this game. (Due in part to poor color choices of the tracks and markers.) The added uncertainty re troop strength when using leader tracks is not worth the trouble. The Surprise Table and the Combat Results Table provide plenty of uncertainty, some of which can be attributable to erroneous intelligence.

2. This module dispenses with the leader displays.

Consequently (to house rule 1), the VASSAL module has no defined player sides, and there are no leader displays for troop and fatigue markers. These markers have been incorporated into the game pieces as layers with dynamic properties (as in my GCACW modules).

When reading the rules and charts, ignore the final zero on all troop strengths, and for "troops" read "strength points." For example: The stacking limit is 300 strength points, not 3000 troops.

Mouse-over Stack Viewer: Strength points appear as text below each individual leader; the hex location and total strength points in the hex appear above.

4. Leaders are VASSAL game-piece images: they are more legible on screen than the printed counter scans. They also scale better when zooming in and out.

5. Disorder and Rout markers have been replaced with a game-piece layer.

6. Fatigue markers have also been replaced with a game-piece layer.

7. Units are marked with an "A" when activated, or "R" when performing reaction movement or retreating after combat.

There is a menu button (global key command) to remove all A and R flags at the end of each player turn.

8. There are no charts or tables in the module. It is assumed that the player owns the game and will refer to printed rules, charts, and tables during play.

9. The map edges (with the number tracks) have been trimmed off. The weather track, and the VP/AP tracks are replaced with game-pieces displaying dynamic properties. The turn tracks have been replaced with a VASSAL turn counter component in the toolbar.

As of 8 Dec 2019 the hex numbers have been removed from the map image; also the giant map labels for "Pennsylvania" and "New Jersey."

10. Splash image in the module is from the painting by George Bingham (1871). 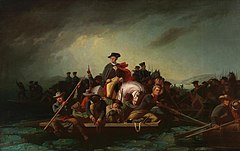