Here's a web-app that takes the player step-by-step through CARRIER's intricate sequence of play. It goes beyond existing CARRIER-assist utilities in that it also tracks Japanese sequence chits plus commitment and retirement levels. 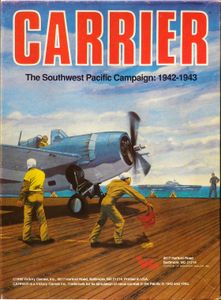 Part of the overhead associated with learning and playing CARRIER is managing the turn cycle and Japanese force chits. The Virtual Flipbook aims to assist the player by incorporating many of the printed tables into the app, keeping track of the following functions:

The player still has a lot to do "manually":

The app consists of a repeating cycle of 14 screens - one for each step of the turn, analogous to the sequence of play. At the bottom of each screen are navigation buttons. The green button (right-most) is used to advance to the next step of the turn. Other buttons are shown to abort the current game, view the state of the game, or resolve an airstrike.

Select a scenario from the drop-down list. The app will process the setup tables and present a scenario. You can repeat this until you have a scenario that you accept. When satisfied with the scenario, record necessary information on the Japanese and US Logs.

The app presents a list of Japanese force arrivals. The player needs to tick the checkbox of any force prevented from arrival for return to the "cup."

The arrival phase is also where you confirm the current number of US task forces.

The app picks chits one at a time and tells you the chit name and what needs to be done. If there are any airstrikes that need to be resolved for this chit pick, click the Airstrike button and resolve, after which you will return to this screen. The app repeats this phase for as many chits as required by rule. When all Japanese chits are done, click for the USN Phase.

Force chits have three parts: Type-ID-Objective. For example: C-12-NH is combat chit 12 for New Hebrides; T-2-GD is transport chit 2 for Guadalcanal. Objectives are:

Rabaul and PBY chits may be treated as Blank if advanced rules are not in use.

A list of tasks is presented for the player. We suggest you perform these in the order listed. The checkboxes may be used to keep track of completed tasks (but are not required, and only mnemonic).

You will need to resolve airstrike contacts manually. If there are any airstrikes that result from the contact table they are resolved by clicking the Airstrike button, after which you will return to this screen.

A time to update the current state of Japanese commitment levels. This screen is where totals can be verified and corrected as needed. Also enter air points lost in the current cycle, and the air value of carriers that are sunk or heavily damaged.

The app displays a list of end-of-turn housekeeping tasks for the player to do manually. After which the app returns the player to the next turn's ARRIVAL PHASE.

When you need to resolve an airstrike, click the Airstrike button. The screen will be slightly different depending on the attacking side. Enter the attack parameters and click "Generate Attack Rolls" - the app will run the tables and report the attack rolls based on what you entered and the moderating factors contained in the session at the current time.

Once you get the attack rolls report, assign the targets and roll for damage. Please note that the "no CAP" die-roll modifer, and the AA table modifier, are already applied to the attack rolls generated by the app. The only modifiers you need to apply are the ones for an "unloading transport" and for carriers that have planes "on flight deck" or "in servicing."

The app will assign US airstep losses based on the total number of participating steps of each type. You may ignore these and assign US air step losses as you wish, per the printed rules.

The game state is maintained in the PHP super global called $_SESSION. You can see what is contained in this variable at any time by clicking the Session button. If you decide to abandon a game in progress, click Restart to wipe the session and go back to the Scenario Setup screen.

Keeping track of the game state means that less player input is needed when generating table results within the program. You don't have to keep entering parameters for die roll modifiers.

For example: the app knows if you are in the early 42 period and applies the anti-aircraft modifier when determining losses (and it automatically doubles AA losses on US airstrikes).

As with the VASSAL modules on this site, this app is always subject to updating and correcting. Please contact the author with any bug reports and suggestions.